Danny Phantom Wiki
Register
Don't have an account?
Sign In
Advertisement
in: A to Z, Characters, Antagonists,
and 3 more
English

The Box Ghost is a recurring ghost villain in Danny Phantom. He is the laughing stock of the Ghost Zone and Danny's weakest foe due to his comical incompetence and egotistical behavior. He usually appears as a minor character and often serves as comic relief rather than a primary antagonist.

The Box Ghost first appears in "One of a Kind." He makes his attack on a warehouse, and is defeated by Danny and captured. He returns to Danny's class at the end of the episode, only to be defeated again.

In "Splitting Images" the Box Ghost attacks Danny in the beginning of the episode and humiliates him by hurling costumes and props from My Fair Lady at him. The Box Ghost returns at the end of the episode with a new name, "The Mechanical Frog Ghost," but he immediately changes his mind when the mechanical frog malfunctions.

In "Prisoners of Love", Danny finds the Box Ghost in the Ghost Zone in an area where human-world objects are kept. Walker finds them and arrests them both. In prison, the Box Ghost and all the other ghosts team up with Danny to escape.

He makes a brief appearance in "Lucky in Love". While Danny and Paulina were on a picnic, the Box Ghost came out of their picnic basket, only to be beaten up by Danny.

He shows up briefly in "Life Lessons", where he is used as bait by Skulker to lure Danny and Valerie.

He returns in "Reign Storm," where he displays his new power to control bubble wrap. At the end, he teams up with the other ghosts to stop Pariah Dark.

He briefly appears in "Identity Crisis," taking offense to Danny's and his friends' perceived low threat level of him.

In "The Ultimate Enemy", in the alternate future he and the Lunch Lady Ghost are married and have a child named Box Lunch. The Box Ghost of this future is much more serious and is no longer the comic relief he once was. He and some of Danny's other villains attack present-Danny, wanting revenge for the terrible fate his future self gave them. At this point, Danny gained the Ghostly Wail and used his new power to blow away the Box Ghost's team of villains.

He returns in "The Fright Before Christmas" as one of the ghosts who help Danny save Christmas, using his powers to return the stolen Christmas presents (which were all in boxes) to their homes.

He later makes another appearance in "Secret Weapons," where he traps Tucker and Sam and fights Danny. Jazz tries to help capture the Box Ghost (whom she mistakenly calls "Crate Creep"), but ends up capturing Danny in the Fenton Thermos instead.

The Box Ghost gets a day in the limelight in "Boxed Up Fury." Frustrated by his lack of recognition in the Ghost Zone and his own pathetic weakness, he steals Pandora's Box and uses its evil powers to wreak havoc on Amity Park. Danny and Pandora defeat him together and force the Box Ghost to clean up the mess he created.

The Box Ghost's final appearance is in the series finale, "Phantom Planet." He is seen once being defeated by Masters' Blasters and again at the end as one of the many ghosts who help Danny and Skulker turn the Earth intangible.

The future Box Ghost seen in "The Ultimate Enemy" appears largely the same, but is more intimidating. He is muscular instead of round and has an eye patch, a scar below that eye, and a hook hand due to injuries from Dark Danny. His former goofy angry expression is replaced with a hateful scowl.

This version of the Box Ghost 10 years later is intended to be more realistic and comic book style. His appearance is based on a dock worker. His aged design (aged appearance, gray beard, and wrinkles) is partly due to having spent many years down by the salt water at the docks. This design is intended to be a more serious Box Ghost.

This version is a sillier version, wherein he takes his persona literally. Because he is a ghost, he can transform his body, and in this version he has transformed his body to make himself entirely out of squares and rectangles, making him a literal "box ghost." He is also able to change his size by shrinking and growing.

This version is a more serious version. In the drawing, he is coming out of the water. He would always have boxes hovering around him, all of which would contain some item that he could use, especially in battle, such as weapons, ancient nautical items (e.g. hooks, chains), sea creatures, etc.

Version 4
This final version is similar to the third version (as seen above), although at the end of the day he still has some comedy to the character. But overall he is more serious and menacing. This version has a hook hand, as also seen in "The Ultimate Enemy." 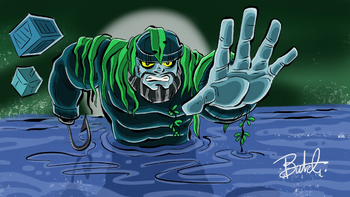