This page is for Dani Phantom, the ghost girl who is Danny's clone. For other uses, see Danny Phantom (disambiguation).

Danielle “Dani” Fenton Phantom is a human/ghost hybrid, a biological clone and “cousin” of Danny Phantom. Created by Vlad Masters, she is a younger, female version of Danny, as well as his only surviving clone. Dani has taken to traveling around the world in hopes of doing her own heroics. It was later revealed by series creator Butch Hartman, that sometime after the series Dani ended up being adopted into the Fenton family, making her Danny’s younger sister.

Desperately lonely despite his vast wealth, Vlad had made a number of unsuccessful attempts to try and convince Danny in disowning Jack Fenton and join him as his son. He then resolved to create the perfect half-ghost son for himself, conducting a series of experiments making clones of Danny, using samples of Danny's DNA which he and Valerie gathered during their battles with the young hybrid. All of these clones were failures, all of them being mindless except one; a younger half-ghost/half-human girl whom Vlad named Danielle.

Vlad treated Dani as his own daughter. He never faltered in showing "love and affection" to her; and she never faltered in her desire to serve her "father." Dani is about twelve years of age biologically,[1] and few months of age chronologically. In "Kindred Spirits," after Vlad created Dani along with a few other clones and sent her on a mission to capture Danny so that Vlad could take the final DNA samples he needed for his perfect clone, she snuck into Danny's room and waited for him in her human form, reading his comic books in his bed. When he came, she introduced herself to him as Danielle (his "third cousin once removed") and they quickly formed a bond despite Danny's initial suspicion and Dani's subservience to Vlad. Later, Dani succeeded in bringing Danny to Vlad. She then found out that the "perfect clone" Vlad was trying to create was not her, but another one, a perfect imitation of Danny that was nearly complete. It would mean that she would be killed alongside Danny once Vlad was finished.

When Vlad showed Dani his true colors by snapping at her for questioning his orders not even caring if she melts, she, disillusioned, joined Danny against him, destroying all his other clones and equipment, and stopping his plan. Dani then bails Sam, Tucker, and Danny out of trouble by overshadowing Mr. Lancer and Maddie mid-rant. She says her goodbyes and then leaves to travel on her own, promising to return.

In "D-Stabilized," Dani's instability finally caught up to her, causing her powers to weaken and her body to spontaneously melt into a puddle of ectoplasm without warning. She returned to Amity Park, seeking Danny's help and hoping to avoid Vlad. Unfortunately, Vlad discovered Dani's presence in Elmerton and sent Valerie to capture her, so he could resume his cloning experiments by melting her down and studying her remains. Ironically, Dani met Valerie in her human form and was friendly to her. However, after Dani used her ghost form to save Valerie from being crushed by a collapsing ceiling, the latter captured her and hatched a plan to use Dani in order to lure Danny. Valerie's plan worked, and she captured Danny, whilst handing Dani over to Vlad.

While torturing and interrogating Danny, Valerie was convinced by Danny to let him go to find a cure for Dani and save her from Vlad, as she was half-human and Valerie didn't want to destroy humans. Using one of his parents' inventions, Danny and Valerie narrowly rescued Dani and re-stabilize her condition with the Fenton Ecto-Dejecto. Rejuvenated, Dani then effectively attacks Vlad and goes with Valerie when Danny tells her to do so, leaving Danny alone to angrily confront Vlad and tell him to stay away from Dani. She then parts ways with Danny again, intending to do her own good in the world.

Dani makes a cameo in "Phantom Planet" as one of the many ghosts assisting Danny in turning the Earth intangible to save it from the Disasteroid.[2]

Butch Hartman later revealed that sometime following the series’s finale, Jazz, Maddie, and Jack eventually learned about Dani’s existence, and accepted her into their family. Thus she is now the adoptive younger sister of both Danny and Jazz.

As Danny's clone, Dani is close to being Danny's identical twin if it were not for her age, for the two of them share the same skin color, eye color, eye shape, and hair color. In her human form, like Danny, she bears a strong resemblance to her genetic mother and sister, Maddie and Jazz, though her hair is longer in the back and pulled into a ponytail.

Dani wears a red beanie, red shorts (plain in "Kindred Spirits" and with a camo pattern in "D-Stabilized"), a blue sweater/hoodie, and shoes of the same style as Danny's but blue.

In ghost form, Dani's skin, hair, eyes, and costume are the same color scheme as Danny's. She has the same D logo as Danny on her chest.

However, instead of a one-piece suit, Dani wears a matching shirt-and-pants set that reveals her midriff, with no belt. The right half of her shirt is white and the left half is black, divided diagonally down the middle, and she wears a white left glove and a black right glove. Her pants are baggy, and are black with streaks of white on the sides that come down to her white boots.

Dani shares many of Danny's likes and personality traits. Unlike the other failed experiments, she isn't mindless and doesn't mind voicing exactly how she feels. A very willful and somewhat tomboyish girl, Dani is a lot like Danny, only more cheerful and childish. She seems to have no concern with responsibility and can be quite stubborn at times.

Dani can be quite naïve, which is, in part, due to her limited existence so far. Because of her limited knowledge, she was easily talked into obeying Vlad's commands, as she thought of him like a real father. It wasn't until she met Danny that she realized that she was just one of Vlad's pawns.

Danny and Dani are close to being identical twins genetically though of different ages chronologically and biologically, ultimately viewing each other as cousins. Their earlier interactions began rocky, as Danny was initially, and rightfully, suspicious of Dani, while Dani saw Danny as an objective that she had been sent to capture on Vlad's orders, holding limited value over his life due to Vlad's manipulations.

Danny was reluctant to fight Dani because she was the only clone that had a mind of her own, and was thus her own self. However, Dani eventually sided with her "cousin" after learning her "father" was only using her to get to Danny and was planning to dispose of her after her usefulness to him ended.

When Dani returned seeking a cure for her worsening instability, Danny was quick to jump at the chance to help her and protect her from Vlad, showing a compassionate and responsible side similar to Jazz's interactions with Danny. He was also quick to make a deal with Valerie to surrender and offer any ghost-related information she wanted in exchange for helping him to save Dani. Both Danny and Dani have grown a strong bond of trust and concern for each other since, and he begins to serve as an older brother figure to her. Series creator Butch Hartman stated in a video that if Danny Phantom had continued on after the third season, Jack and Maddie would've adopted Dani as their daughter, making her the younger sister of Jazz and Danny, which was later confirmed to be canon.[3] Thus it is heavily implied that their bond has grown even stronger.

Dani originally looked up to Vlad as her "father" and did whatever he told her to do, unaware that he was simply manipulating her. He considers her a mistake--just another imperfect attempt at cloning Danny in order to get the perfect son he has always wanted, and when Vlad gets that perfect son he would dispose of Dani.

When her ghost half became unstable, Vlad manipulated Dani into capturing Danny, saying he can cure her through collecting Danny’s “mid-morph” DNA. She was heartbroken when the truth was revealed and developed a hatred towards Vlad, siding with Danny against Vlad, destroying all the other clones.

When Dani had returned with a worsening condition, Dani hoped to find Danny while staying clear of Vlad, fearing for her life. Vlad discovered her, however, and sent Valerie to capture Dani, under the lie that Dani's ghost half wanted Vlad dead. As her condition worsened in captivity, she asked Vlad if she was going to cure her. But to her horror, Vlad revealed that he was going to melt her down and study her remains in order to resume his cloning experiments. However, Dani was saved in time and summarily beat down Vlad.

Ironically, if Vlad had raised Dani like he would have raised Danny or the primary clone, he might have succeeded in his plan to have a loving family, but instead created another bitter enemy.

Like Danny's interactions with Dani, Valerie's began rockily as well. Valerie was a bit skeptical of Dani being a legitimate threat when asked by Vlad to capture her, though she believed Vlad's lie that Dani was plotting to destroy him.

Even though Dani saved her from being crushed by a building, Valerie was quick to restrain her and prepare to hand her over to Vlad, waving off any of Dani's pleas that Vlad was the evil one. Valerie then decided to manipulate Dani into luring Danny into a trap. The plan worked, and she kept Danny to torture and interrogate whilst giving Dani to Vlad.

During captivity, Danny convinced Valerie that Dani was good, and that if Vlad succeeded, Valerie would have helped him in destroying a human being, as Dani was half-ghost. She lets him go and helped him save and cure Dani.

As a clone of Danny, Dani is genetically related to the members of his family. While they have no official interactions in the show, it was stated by series director Butch Hartman that had the series gone on for a fourth season the Fentons would have adopted Danielle. This was later confirmed to be canon, thus making her an official member of the Fenton family. This means that Jack and Maddie have come to accept and love Dani as their daughter, with Jazz also coming to accept and love Dani as her sister. Thus it is clear that Dani, in turn, loves her genetic relatives and is very grateful for them taking her in and giving her a home.

Dani also attends college, but 1-2 years later than the other teens. Not much is known about her life at this time, other than that she is a street kid. She's probably more street savvy than the trio.

Version 1
In this first iteration, Dani is 20 years old and her costume mimics Dark Danny's outfit in The Ultimate Enemy. She has pointed ears, though Hartman comments that this does not automatically make her evil. It is unknown if this version is good or evil.

Version 2
This Dani is a more buffed up version of her character. This version is described as similar to a 1980's female bodybuilder.

Version 3
This version looks a bit more evil than the previous versions. Though it is not confirmed, it is hinted that this Dani went to the dark side.

Version 4
The fourth and final version is a combination of Danny's 10 years later costume and Dark Danny's hair. This Dani is spunky and "likes to party," but her partying is kicking ghost butt, not rocking out to music at a concert. 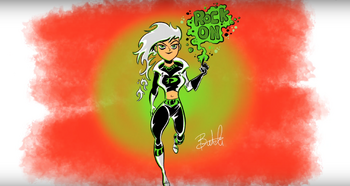 Retrieved from "https://dannyphantom.fandom.com/wiki/Dani_Phantom?oldid=113101"
Community content is available under CC-BY-SA unless otherwise noted.