Danny Phantom Wiki
Register
Don't have an account?
Sign In
Advertisement
in: Citations needed, Database, A to Z, World of Danny Phantom
English

August 24, 2007
Danny Phantom is an American animated television show created by Butch Hartman for Nickelodeon, produced by Billionfold Studios. It originally ran from April 3, 2004 to August 24, 2007. The show is about Danny Fenton, a teenage boy who gained ghost powers through an accident in his parents' lab, who takes on the alter ego of Danny Phantom to save his town and the world from ghost attacks, all while struggling through school and his teenage life.

Danny Phantom centers on the life and adventures of 14-year-old Danny Fenton, an unpopular 9th-grade boy attending Casper High. He lives with his eccentric ghost-hunting parents, Jack and Maddie, and his overbearing older sister, Jazz. One day, he wanders inside his parents' ghost portal and accidentally triggers its activation, infusing his DNA with ectoplasm. This transforms him into a half-ghost, half-human hybrid, and gives him an array of ghostly powers such as the ability to walk through walls, turn invisible, and fly. Danny struggles to learn to control his new powers, but when ghosts start coming out of the newly-activated ghost portal, he realizes that he must use his powers to protect his town from the evil ghosts coming out of the portal. Danny's best friends, technophile Tucker Foley and Goth-minded Sam Manson, support Danny and help him in his adventures.

Throughout his adventures, Danny faces a variety of ghostly enemies from the Ghost Zone. He also faces enemies from Earth, such as vengeful ghost hunter Valerie Gray, rival half-ghost Vlad Masters, and even his own ghost-hunting parents. Throughout it all, Danny slowly realizes his own potential and his purpose, while both worlds, the Ghost Zone and Earth, begin to accept him as their defender. Over time, Danny becomes more confident both as a superhero and as a teenager.

In February 2001, Butch Hartman found out that Nickelodeon was looking for a boys' animated action show, and developed the concept for Danny Phantom. His original idea for the show was called Danny Phantom and the Specter Detectors, which was about a teenage boy and his friends who would use gadgets to hunt ghosts. However, Hartman later thought it would be cooler if the boy was a ghost with superpowers, and shortened his concept's name to Danny Phantom.

For the character designs, Hartman had help from veteran character designer Stephen Silver. Most of the stories were written by Steve Marmel, with input from Mark Banker, Butch Hartman, Marty Isenberg, and Sib Ventress. As with Hartman's other popular show, The Fairly OddParents!, the music for Danny Phantom was written by Guy Moon.

Nickelodeon originally purchased 40 episodes (two seasons), and later purchased another 13, for a total of 53 episodes, including four double-length made-for-TV movies. On January 24, 2006, Nickelodeon announced that it had ended support for new episodes of the series. Fans of the show expressed outrage at the cancellation, citing Hartman's admission on his forums that he wished to create more episodes. Hartman has stated on his personal forum that he would be willing to make more episodes if the show were to be picked up again.

The Danny Phantom theme song introduces Danny and explains how he got his ghost powers and his role as a superhero. The lyrics were written by Guy Moon, who also did the vocals. Hartman did the background vocals.

Hartman mentioned in an interview that the theme song was inspired by Queen's 1989 song "The Invisible Man." 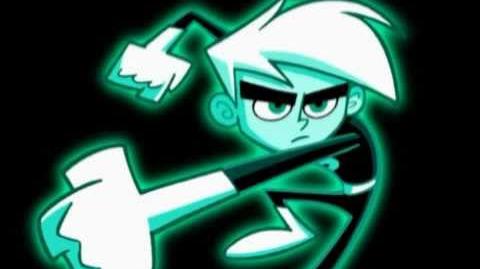 Danny Phantom characters have also made appearances in other Nickelodeon video games:

Danny Phantom was well-received by both television critics and audiences. The series gathered a cult following. Many audiences described the series as one of Butch Hartman's best shows, with Hartman acknowledging so as well.

Sean Aitchison of Comic Book Resources stated in 2017 that "Danny Phantom might have a few elements that firmly place it in the 2000s, but the storytelling and design still feel fresh and fun in modern day. The show was full of action and humor, and the characters felt real and layered. If you're looking for an old Nickelodeon cartoon to rewatch, Danny Phantom should be on your list."[2] Eris McInnis wrote for Study Breaks Magazine that "[the] show offered fun comedy, memorable characters, and fantastic character designs for the enemies Danny had to fight in each episode."[3]

Joly Herman of Common Sense Media criticized the series for its violence, stating that the show "can be funny, and the characters are unique. But, as is the case with so many contemporary cartoons, the rush to violence overshadows the good aspects of the series. Death threats, torture, knives, and violence against women are commonplace. There's no opportunity to work things out. Danny is either a coward or a hero -- there's no in between. He either fights or perishes, which is a heavy choice for a sensitive guy."[4]