Danny Phantom Wiki
Register
Don't have an account?
Sign In
Advertisement
in: A to Z, Locations, Earth, Towns and cities

Elmerton is the town where Damon and Valerie live as of "Shades of Gray." It is noticeably less prosperous than the neighboring Amity Park, with a polluted and industrial-like appearance; the town's slogan is We're getting better and the town is full of apartment complexes. The city is generally depicted in grays to emphasize the dreariness of the town, unlike the city of Amity Park, which is depicted with bright and vibrant colors.

After Damon was fired from his job at Axion Labs, he had to move from his house in Amity Park to an apartment in a city with a lower living cost. This immediately impacted Valerie's social standing among her peers at Casper High School, as her former friends value status and looks and deemed a person from a low-income family to be below their "A-lister" standards. Due to this, she gains a grudge against Danny Phantom, the perceived cause of her father's firing.

In "Life Lessons", Danny Fenton goes to Valerie's apartment to give her their flour sack for their health class project, and again later after they return from the Ghost Zone.

In "D-Stabilized", Valerie is seen patrolling for ghosts in the city. This is where she first meets Dani. 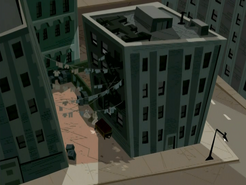 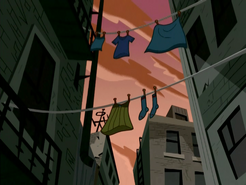 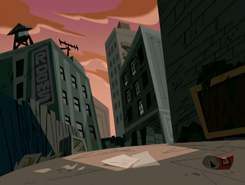 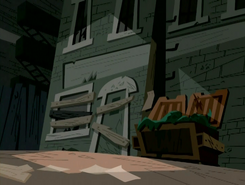