Danny Phantom Wiki
Register
Don't have an account?
Sign In
Advertisement
in: A to Z, Characters, Antagonists,
and 6 more

"Phantom Planet"
The Executioner Ghost is one of the minions of Prince Aragon and appears in the episode "Beauty Marked."

In "Phantom Planet," during Vlad's monologue on the news about other ghost hunters being useless, Valerie is seen chasing the Executioner Ghost. She is knocked away and it is captured by Masters' Blasters.

The Executioner Ghost seems to have all the usual ghost powers. Besides this, he can send out a spectral noose, which he can use as a lasso. His axe returns to him when he throws it, similar to a boomerang. 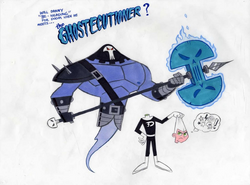