Attack of the Killer Garage Sale

6
Exorcism is the ability to forcefully remove ghosts from the body, object, or location they are possessing through the use of ghost powers or anti-ghost technology.

In "Attack of the Killer Garage Sale," Danny uses the Fenton Thermos to remove Technus from his battle suit.

In "What You Want," Danny reaches inside the monster with his intangibility and removes a ghost possessing Dash, returning him to normal. Danny manages to extract the kitty ghost out of Paulina with his ghost ray. Tucker Phantom forcefully ejects Danny from his body after Danny tries to overshadow him to see why he's been acting differently. Danny later uses the Fenton Ghost Catcher to separate Tucker from the ghost possessing him.

In "Bitter Reunions," Danny uses his intangibility to forcefully eject Vlad from Jack's body to free himself of him.

In "Identity Crisis," Danny uses the Fenton Ghost Catcher on himself to separate Danny Phantom from Danny Fenton so he can finally have a personal life. Later, Sam and Tucker use the Ghost Catcher to remove Technus from the mainframe of Fenton Works.

In "The Ultimate Enemy," Vlad uses his Ghost Gauntlets to remove Danny Phantom from Danny Fenton, per Danny's request. However, Phantom takes the Gauntlets after this and uses them to separate Vlad Plasmius from Vlad Masters. Phantom then combines with Plasmius, resulting in the creation of Dark Danny.

Users can exorcise a ghost from a body, object, or location through one of two methods. The first is with natural ghost powers, either with ghost energy or claws to physically separate the ghost from its vessel. The second method is through the use of ghost technology, such as artificial claws and other ecto-weapons. 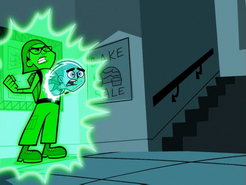 Retrieved from "https://dannyphantom.fandom.com/wiki/Exorcism?oldid=101973"
Community content is available under CC-BY-SA unless otherwise noted.