Danny Phantom Wiki
Register
Don't have an account?
Sign In
Advertisement
in: Needs help, A to Z, Locations,
and 4 more

Fenton Works is a company owned by Jack and Maddie Fenton, located in the Fenton family's house in Amity Park. It serves as the household setting for Danny Phantom.

The Fenton Works' Lab, located in the basement, contains the Fentons' ghost portal, which provides Danny and his friends with access to the Ghost Zone.

In "Kindred Spirits", there is a pool that opens when the Specter Speeder comes through.

The entire building is fitted with hidden turrets and other ghost defenses that when activated, will pop out of the walls and ceiling and automatically attack anything using ectoplasmic energy.

There is an open space behind the house, surrounded by a fence along the edge of the property. The area is mostly empty, save for an inflatable pool that hides a secret passageway to/from the lab.

The manor has three bedrooms on the second floor, which consists of one master bedroom and two smaller bedrooms. All three rooms are shown, and confirmed, in Season 1, however, there may be more than just three. [1]

The master bedroom is used by Jack and Maddie.

This bedroom is used by Danny.

The third bedroom is used by Jazz.

Only seen in "Fanning the Flames" when Jack and Maddie scold Danny and Jazz.

The kitchen of the house was a large and bright-colored room with an entrance to the living room. Like any household, the family spent a lot of time in the kitchen for regular daily activities and conversations.

Additionally, the family kept several invention equipment in the kitchen and build inventions when the invention required to be prepared on the table.

The living room of house is a regular sized room located at the front of the house.

The Ops Center is a large room located above the house, which is accessible through a hatch on the floor of Fenton Works, as well as several voice-activated pneumatic tubes around the house. It is secured to the top of Fenton Works, but it also serves as a detachable vehicle.

The lab of the Fenton Works is located on the presumably basement floor. It is a large space. Aside from being a typical basic laboratory used for as a facility. The laboratory was the place to perform a lot of their experiments and various important events have taken place in the laboratory like when Danny Fenton activated the Fenton Portal that gives him ghost powers. It also is where they keep their equipment.

Additionally, it was the location where Tucker and Sam trained Danny in combat. The laboratory is where Danny first discovered he was the ghost boy.

As such, the family might spent a lot of time in the laboratory when he needs to use weapons, stop ghosts or other villains.

The entirety of Fenton Works has anti-ghost defenses. The first line of defense is the Fenton Ghost Shield; the generator is placed on the Ops Center and creates a protective dome around the property.

If there is a threat inside the house that has not been deterred by the ghost shield, there are internal defenses that protect the Fentons from attack. As seen in "Reality Trip" there is an emergency defense system that attacks anything using ecto-energy. And in "Forever Phantom" the ghost defense system is a series of alarms and sirens to signify to Jack and Maddie that there is a ghost in the house.

The internal defenses are activated by a button. In "Reality Trip" the button was protected by a glass case that could be accessed by anyone, but in "Forever Phantom" the protective case could only be removed via a hand-print scanner, likely programmed to only allow Fenton family members to activate it. 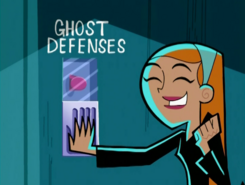