Freakshow is the ringmaster of the Circus Gothica, and comes from a long line of ghost-obsessives. His family has the largest-known knowledge of ghostly artifacts.

Freakshow first appeared in the episode "Control Freaks," where he opens a circus called the Circus Gothica in Amity Park which Sam loves. The performers in the circus are actually ghosts that are on a crime spree, held under Freakshow's command by a special staff. The staff is Freakshow's main weapon in this episode and is so powerful that even a picture of the staff makes a ghost weak and willing to do the bearer's bidding.

Danny accidentally catches sight of the staff when he sees an ad for the Circus Gothica and ends up in Freakshow's command, stealing money for him and becoming a performer in his circus. He is saved by Sam, who manages to return him to the hero he truly is. Danny subsequently rescues Sam, destroying the staff in the process.

Following the staff's destruction, Danny and most of the formerly controlled ghosts (except Lydia, the tattoo ghost lady) confront Freakshow, trapping him in his own stolen goods until the police can arrest him.

Freakshow reappears as the main antagonist in "Reality Trip." In this episode, the Guys in White have captured Lydia, using her to get Freakshow to talk about the Reality Gauntlet, which he does. Freakshow tricks the Guys in White into giving him the Reality Gauntlet and he uses it to escape with Lydia. He then attacks Danny at Casper High's "School's Out!" Dumpty Humpty concert.

Danny, Sam, and Tucker use the Gauntlet's defense mechanism to transport three critical gems from the gauntlet, making it useless. Freakshow escapes with help from Lydia, but not before revealing Danny's secret identity to the entire school and Amity Park media. Nursing his wounds, Freakshow comes up with a plan to get all three gems back by kidnapping the parents of Danny, Sam, and Tucker.

Freakshow forces Danny, Sam, and Tucker to retrieve the three gems in exchange for their families' lives, giving them three days to do so. After Danny and friends succeed, Freakshow double-crosses Danny and retakes the Reality Gauntlet, giving himself control over all reality. In a deadly attempt at showmanship, Freakshow gives Danny the chance to save the lives of his friends and family from a roller coaster filled with deathtraps.

Informed by Jazz that Freakshow suffers from "ghost envy," Danny, in an attempt to defeat Freakshow, taunts Freakshow and makes him jealous of Danny's ghost powers. Outraged, Freakshow uses the Reality Gauntlet to transform himself into a ghost. This allows Danny to capture him in the Fenton Thermos.

Danny then uses the Reality Gauntlet to undo Freakshow's madness and to rewrite reality so that his secret identity was never revealed. Danny uses the gauntlet to turn Freakshow human again and gives him back to the Guys in White. Despite Danny's reality rewrite, Freakshow's lack of a blank expression suggests he may actually still know Danny's secret identity.

Freakshow makes a cameo in "Phantom Planet" as a ghost. This is likely an error, as Freakshow is human.

Freakshow has pale chalky-white "anemic"[1] skin, is bald, and has red eyes. He wears red lipstick and black eyeliner, has yellow teeth, and has an abnormally long pointed nose. He wears ringmaster attire consisting of a red unitard, a black vest and bow tie, and black boots with red buckles.

He also wears a long dark gray jacket with three red buttons on each cuff and a red stripe near the bottom trim of the jacket. Freakshow's accessories include a small black bowler hat with a red stripe, a triangular red earring (a.k.a the power source for the Reality Gauntlet) on his right ear, and black gloves.

A charismatic performer, Freakshow is a smooth-talking man of drama and showmanship, seeing the world as a circus with him as its ringmaster. A glutton for power and attention, he is a controlling, vindictive man who does whatever he can to get what he wants.

He claims to love ghosts, as his family has worked with them for generations. However, he truly hates them, only using them as minions, and exhibits an obvious jealousy toward ghosts and their powers, throwing tantrums and fits of rage whenever he is "upstaged" by them.

He feels that his family, his audience, and even he himself likes ghosts more than they like him. This envy fuels his desire to acquire even more power, but is also a great weakness (giving Danny the chance to tease him into a losing position in "Reality Trip").

Lydia is more than a mere assistant or sidekick to Freakshow. It is hinted that the two have, or had, a romantic relationship despite Freakshow being a human.

Freakshow sees Danny as his main enemy. He wants revenge for being sent to prison, and kidnapped Danny's family as a scheme to get the reality gems back. After Danny sent him to prison again, it is most likely that Freakshow's desire for revenge has only increased.

Despite being enemies and Freakshow attempting to kill her along with the rest of Danny's friends, family, and friends' families on the deathtrap-filled roller coaster, Jazz Fenton appears to be the only person Freakshow seems to respect. Their relationship is based on their common ghost envy, though Jazz's is not as bad as Freakshow's. Because of their common envy, Jazz is empathetic to him. 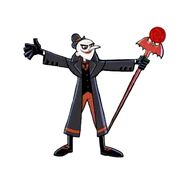 Retrieved from "https://dannyphantom.fandom.com/wiki/Freakshow?oldid=105561"
Community content is available under CC-BY-SA unless otherwise noted.