Danny Phantom Wiki
Register
Don't have an account?
Sign In
Advertisement
in: A to Z, Species, World of Danny Phantom

"Phantom Planet"
A ghost is a supernatural creature in Danny Phantom. Ghosts are spiritual beings from an alternate dimension known as the Ghost Zone.

Many ghosts introduced in the first season appear to be the disembodied spirits of dead humans or other Earth creatures. Maddie once defined them as an "odd manifestation of ectoplasmic energy and post-human consciousness."[1] This was supported by several ghosts' backstories, such as Desiree and Sidney Poindexter, which detail their lives as humans before becoming ghosts.

However, ghosts introduced in the second season onward became less human and more otherworldly in backstory and appearance. Creator Butch Hartman eventually stated that ghosts were in fact otherworldly monsters and creatures that came from the Ghost Zone, with no connection to human spirits.[2][3] The explanation for ghosts with human backstories or appearance is that they want to be human so they create these backstories for themselves. [4]

Ghosts' bodies typically take on an anthropomorphic figure. Ghosts typically have pale blue or green skin, and emit a distinct white aura around their bodies.

Most are not humanoid at all, taking the form of shapeless blobs (Skulker, Bertrand), anthropomorphic animals (Wulf, the Vulture Ghosts), or monsters (the Ectopuses).

Ghosts' names have many different origins. Some ghosts retain their names from when they were alive (Sidney Poindexter), some have common human names or nicknames (Walker, Johnny, Kitty), and some choose their own names (Youngblood). Some are named after their powers or characteristics (Ember, Fright Knight, Undergrowth), and some are merely named after literal descriptions of who they are or what they do (Box Ghost, Lunch Lady Ghost).

Many ghosts have strong obsessions, which often lead them to their evil behaviors. For example, the Lunch Lady Ghost is excessively conservative about the cafeteria menu, Spectra is obsessed with her appearance, Walker is extremely strict with his rules, and Klemper has a compulsion to make friends. Ghosts' powers are usually related to these obsessions.

Ghosts are capable of having children together, as made evident by Box Lunch, daughter of the Box Ghost and the Lunch Lady.[6] It is unknown if ghosts are immortal like their counterparts in real-world folklore; Walker once said that he is an "executioner,"[7] which has led to much debate among fans.

However, despite their powers all full ghosts are vulnerable to ghost weaknesses such as Anti-Ghost weapons, Ecto-ranium, and Blood Blossoms. Another weakness is while in their natural state, they cannot interact with real world objects as shown in the episode "Prisoners of Love", Walker could not interact with Danny due to the fact that in the Ghost Zone, humans are considered "ghosts", as they are shown capable of passively phasing through everything despite not knowing they could do so.

A half-ghost is a human whose DNA is infused with ectoplasm. These humans possess many of the powers and abilities that ghosts do. Danny Phantom, the protagonist, is well known to be a half-ghost. 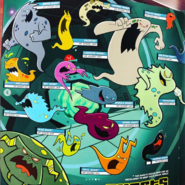