Rob Paulsen
Jack Fenton is the husband of Maddie Fenton and father of Danny and Jazz Fenton. He is a ghost hunter and one of the co-owners of Fenton Works.

His life before his college days is unknown. According to him, he was born in a log cabin and had always wanted a pony, but never got one, as he and his family had to eat horse meat during the war.[2] It is not known if this is true or if he was just rambling. He has an ancestor named John Fentonightingale who lived during the time of the Salem Witch Trials[3], with whom he shares his looks and obsessiveness, indicating that contact with the paranormal seems to run in his family.

During his college days at the University of Wisconsin-Madison, he and Vlad Masters were once best friends, along with Maddie. The three of them built an early version of what would later become the Fenton Portal, which they called the proto-portal.

When the portal was nearly complete, Jack, Maddie, and Vlad gathered to test it for the first time. Jack unwittingly filled the Ecto-Filtrator with diet cola, causing the portal to malfunction while Vlad stood directly in front of it, blasting Vlad with a beam of ectoplasmic energy. Vlad came down with a horrible case of ecto-acne and was hospitalized for years. Soon after, Vlad lost contact with Jack and Maddie, but still held a grudge against Jack.

Sometime after college, after an embarrassing proposal by Jack, Jack and Maddie got married. They had two children, Jasmine and Daniel. During the next years, although they would occasionally argue over things like Christmas, Jack and Maddie had a good life, working on experiments and raising their children.

They eventually decided to have another go at building a ghost portal. Although they thought it didn't work after they had finished it, Danny explored it and accidentally turned it on. This situation, unbeknownst to Jack and Maddie, resulted in Danny becoming half-ghost.

In "Mystery Meat," Jack accidentally mistakes Jazz for being a ghost when she exhibits interest in taking Danny to school. Once Jazz explains to him that he is wrong, Jack announces his plan to stop hunting ghosts, finally starting to believe they don't exist. However, his decision is forgotten when Danny Phantom, the first ghost Jack has ever seen, comes by and takes the Fenton Thermos. After this, Jack is confident that ghosts exist and even more determined to catch one, fishing in the Ghost Portal and working on more ghost-hunting technology.

In "Bitter Reunions," Jack and Vlad are reunited during a college reunion hosted by Vlad, who has become a billionaire, in his castle. Vlad says that he is willing to forget the past, and Jack believes that they are on good terms again. In reality, Vlad still wants Jack dead, and never forgave him for marrying Maddie (the love of his life) and having a happy family with her.

In "The Ultimate Enemy," Jack was killed along with Danny's family and friends in the Nasty Burger explosion that drove Danny down the path to becoming a supervillain. When Dark Danny went back in time, he criticized his parents for being so easily fooled into not realizing Danny was a half-ghost. Clockwork prevents their deaths from happening and allows Danny to correct the present.

In "Reality Trip," Jack and the rest of the world discover Danny's secret and are shocked. He doesn't realize why Danny didn't tell him until Jazz criticized her parents' anti-ghost behavior for making it harder for Danny to reveal himself. He was accepting of his son's condition at the end, but Danny altered reality to make him and nearly everyone forget.

In the episode "Masters of All Time," in an alternate reality, Jack was the one in which the lab accident 20 years ago happened to. Jack got the ecto-acne, which transforms him into "Jack Plasmius." This accident happens because Danny had gone back in time to try to prevent the accident from happening so that Vlad would not have become Plasmius. Also in this timeline, Vlad is married to Maddie, but both Jack and Maddie still love each other. Unlike Vlad he did want to originally use his powers for good, but his clueless nature didn't give him the best of starts. He attacked Danny in his lab, not believing Danny's claims about being from an alternate timeline, but later teams up with Maddie and Danny when it turns out Vlad was deceiving Maddie into thinking Jack didn't love her as the two discovered the alternate world. Jack is seemingly killed by Vlad causing Maddie to throw Vlad into the Ghost Zone before Danny goes back and fixes everything.

In "Phantom Planet," the show's finale, Vlad reveals his identity as a ghost to the entire city. In the climax, Vlad is trapped in outer space near fatal ectoplasmic energy fields which surround him. Begging Jack to let him board his ship, and stating that he would not abandon an old friend, Jack, finally realizing that Vlad doesn't like him, replies "An old friend? No. You? Yes." He shrugs him off and heads off to Earth, leaving Vlad to fend for himself. After learning Danny's true identity as the ghost boy, Jack offers to team up with his son, making Danny his "sidekick."

Jack is large and bulky, with black hair with some white in the back and blue eyes. He always wears an orange jumpsuit with black gloves and boots. He is also seen wearing his jumpsuit hood and lab goggles with teal lenses in two episodes. It is similar in design to the one Maddie wears.

Jack is incompetent at times, even coming off as goofy, clumsy, and obsessed with ghosts.

Despite this, he is actually well-meaning and quite smart, capable of building working ghost and ecto machines. He is also protective of his family, and jumps at chances for quality bonding. This was seen when he defeated attacking ghosts led by Vlad on his own to protect his family, even shedding his usual ineptness and showing his competent nature.

He is a brilliant inventor, but can come off as absent-minded. When initially activating the ghost portal he left disappointed when it didn't activate, forgetting that he installed the on switch on the inside of the portal, which was what caused the accident with Danny. Sometimes, he's had no problems going to wherever Danny is, unintentionally getting Danny in trouble or embarrassing him.

He is a loving and devoted father and husband. Even though his passion for ghost hunting may appear to overshadow everything else, his family is still the most important thing to him.

He's also been shown to be fairly narcissistic, as shown in "Forever Phantom" where he names things after himself and by the fact most of his inventions have his face like the blimp, his toast, etc.

While Jack was usually oblivious to Vlad's dislike of him, his eyes were opened after seeing his ghost powers and revealing his true feelings. Jack ultimately turned his back on him for tricking him and putting his family in danger.

Danny and Jack have a close relationship. Danny appears to love and admire his father, although when it comes to protecting his ghost hunting and social life, Jack has proven to be more of a hindrance than a help. Danny is constantly embarrassed by his father in public due to his over-the-top personality. Jack's passion for ghost hunting caused Danny to become ashamed of him and very quiet about his family's "hobby." Eventually, Jack begins to embarrass his son less often. Jack wants his son to look up to him, so it pains him whenever Danny expresses a negative opinion of him.[4] He also will punish Danny for his actions, too, sometimes grounding him. But Jack deeply loves his son, going to great lengths to protect him and his family from ghosts.

For most of the series, Jack sees Danny Phantom as "Ghost Enemy #1." However, when he and Maddie learn of their son's true identity in instances like in "Reality Trip" and "Phantom Planet," they accept Danny for who he is, telling him that they'll always love him no matter what.

Maddie is the wife of Jack. They seem to be together every time they're on-screen. She is a maker of ghost-hunting supplies, too, but they seems to detect Danny every time they use ghost-tracking supplies, until they know the truth in "Reality Trip." She always wears a mask, unlike the other members in the Fenton Family.

Jazz Fenton is Jack's daughter, and Danny's older sister. She is also a student at Casper High like Danny. She also does not know the truth until "My Brother's Keeper." She is trapped once with her parents, along with Sam and Tucker's parents in a cage by Freakshow in "Reality Trip." She seems to be scared at ghosts sometimes as she screamed once when seeing a ghost.

Vlad was once Jack's best friend, probably the closest thing he had to a brother. The two of them used to be roommates and lab partners in college. They did everything together, until the proto-portal that gave Vlad his ghost powers put a halt on their friendship. Jack was oblivious of Vlad's contempt for him in later years and often preferred to be supportive of his one-time "best friend" for most of the series. It wasn't until the show's finale that he learned of Vlad's true nature. Once Vlad begged Jack for help, cynically saying he wouldn't abandon an old friend, the ghost hunter simply gave his former friend a hurt, angry last reply: "An old friend? No. You? Yes." This ended their friendship once and for all.

Version 1
This first version of Jack is a cyborg-style in that his body is part man and part machine at this point in time. The entire right side of his body is gone and has been replaced by machines. And, true to his character, Jack is proud of his machinery. Not only does he embrace his mechanical parts, he also notes the bright side of being part machine means that he has to take fewer showers and in order to battle all he needs is to oil up and he's ready to go. As with all Fentonworks technology, his mechanical half is powered by ectoplasm. Hence ecto-tronic (half ecto half electronic).

Version 2
This version is not dissimilar to his design seen in the series, with the main differences being his long white/gray hair, tied back in a ponytail like a biker, and the DP logo on his jumpsuit.

Version 3
The third and final version of Jack 10 years later is similar to the first one, in that he has robotic limbs. He has scars from the many dangerous battles that they have fought, but he doesn't let this slow him down. During the past 10 years he has lost his right arm, right leg and left eye, but kept his spunk, making him "part machine, part man, all American." Not only does Jack embrace his mechanical side, but he uses it to market Fenton Works technologies similar to Iron Man in the MCU. For example, he might fire a blaster and then say something like "This is my brand new gun, brought to you by FentonWorks." 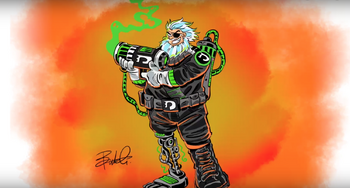 Retrieved from "https://dannyphantom.fandom.com/wiki/Jack_Fenton?oldid=105913"
Community content is available under CC-BY-SA unless otherwise noted.