Danny Phantom Wiki
Register
Don't have an account?
Sign In
Advertisement
in: A to Z, Characters, Humans,
and 4 more
English

This page is for Maddie Fenton, the matriarch of the Fenton family. For other uses, see Maddie (disambiguation).

Kath Soucie
Madeline[2] “Maddie” Fenton is the wife of Jack and the mother of Jazz and Danny. She’s a scientist, one of the co-owners of Fenton Works and ghost hunter just like her husband, though she’s better at ghost hunting and more intelligent than him. Maddie is considered to be one of the few humans who can actually give some trouble to Danny if she decides to hunt him.

In "Prisoners of Love," it's revealed that intelligent women run in Maddie's family. She has a sister named Alicia, who lives by herself in a cabin in their isolated woodland hometown.

In her college days, Maddie was friends with Vlad Masters and Jack Fenton. The three worked on a Ghost Portal protoype, but it backfired, blasting Vlad in the face with ectoplasmic energy and causing him to come down with ecto-acne. This was due to Jack looking at her instead of his work, causing him to accidentally spill diet cola into the machine instead of ecto-purifier.

Eventually, Jack married Maddie and they had two children: Jasmine and Daniel Fenton. Maddie became a technical genius and founded her own company, Fenton Works, with her husband. She was interviewed by Genius Magazine.

However, her interview wasn't included in it once she started talking about her interest in ghosts. Aside from paranormal science and ghost hunting (with which both combined are a very close second), Maddie serves as the more rational parent and shows more concern for her children's welfare than her husband. That said, she has an extreme obsession concerning ghosts and poses a large threat to them.

Unlike Jack, Maddie often takes a more proactive role in fighting ghosts, using a mix of martial arts and high-tech gadgets that she and Jack build, but that he can never quite use correctly.

In "Maternal Instinct", she defended her helpless son (who temporary lost his powers via a Fenton device) against several ghosts allied with Vlad.

In "Girls' Night Out", she teams up with her daughter and Sam to defeat Spectra, Ember, and Kitty when they overtake Amity Park and make all the men disappear.

​​​​​​In "Masters of All Time," Danny tries to alter the past so that the lab accident 20 years prior would never happen and thus cause Vlad Plasmius to not exist.

However, he ended up creating an alternate world where his father is 'Jack' Plasmius and his mother is married to Vlad and keeps her ghost-hunting obsession a secret from him. The timeline is changed to normal when Danny manages to tell both his parents about this false reality. Maddie sent him through her ghost portal where he managed to get reality fixed to what it originally was.

Both Maddie and Jack have learned on four separate occasions that their son is part ghost. The first time was when Dan Phantom/Dark Danny revealed his secret in "The Ultimate Enemy." The second was during an alternate timeline in "Masters of All Time." The third was when Freakshow was after the reality gems in "Reality Trip." And lastly, the fourth was near the end of "Phantom Planet."

Only that last time did they (and the entire world) know permanently, however. Still, in "Reality Trip," she accepted Danny's half-human half-ghost nature, for the short time that she knew.

Maddie is a beautiful woman of curvy figure. She has violet eyes, shoulder-length auburn hair and red lipstick. Her children inherited her facial features and figure.

In the series, Maddie is seen wearing a blue rubber jumpsuit with long black gloves and boots. Her suit also has a black belt with one pouch for her equipment. She’s sometimes seen wearing her jumpsuit hood, which she wears along witth a pair of black lab googles with red lenses.

Maddie is a firm believer in what can be strongly evidenced (in the Danny Phantom universe, that includes ghosts) and is more rational than her husband.​​​

Unlike Jack who merely wants to rip them apart, Maddie believes in a more scientific approach, preferring to examine them. Of course, she often unknowingly makes Danny nervous whenever she talks about how she wants to dissect a ghost or study the remains after she blasts them to tiny bits. Like Jack, Maddie is none too friendly towards ghosts, though she's not quite as fond of destroying them outright.

Despite her obsession with ghosts, Madie absolutely loves her family and will do anything to defend them.

Danny used to be really close with Maddie when he was little. Despite not being as close to his mother now, Danny still loves Maddie and looks up to her.

For most of the series, Maddie sees Danny Phantom as an evil "filthy ghost" and doesn't trust him in spite of his constant heroism. However, when she and Jack learn of their son's true identity in instances like in Reality Trip and Phantom Planet, they accept Danny for who he is, telling him that they'll always love him no matter what.

Maddie has known both Jack since college, where they were fellow members in a club about ghosts. Afterwards, the two married and work together as ghost hunters. Though their approaches are different, they always support each other. Maddie has always stayed true to their relationship and defends Jack against Vlad whenever Vlad has spoken ill of him.

Maddie does get along well with Jazz even though she does embarrass the latter at times. Jazz idolizes her mother and believes her to be the perfect role model for modern women.

Danielle Fenton, also known as Dani Phantom, is a clone and younger female version of Maddie’s son Danny. Thus she’s technically Maddie’s biological daughter. When Maddie, Jack and Mr. Lancer sought to punish Danny, Sam and Tucker, Danielle used her powers to overshadow her biological mother and Mr. Lancer in order to get Danny and his friends out of trouble. Though they share no intimate interactions in the series, with Maddie being unaware of her existence, Butch Hartman confirmed that sometime after season 3, Maddie would not only learn of Danielle’s existence, but would also end up taking custody of her as well. This shows that Maddie has come to love and accept Danielle as her own child just like Danny and Jazz, regardless of her origins.

Maddie has known Vlad since college, where they were fellow members in a ghost-themed club with Jack. During that time, she had been unaware of Vlad's feelings for her. Even in the present, she views Vlad as just a friend, despite his attempt to amend that opinion.

In "Maternal Instinct", Vlad declares his feelings to Maddie, feelings which she doesn't return nor appreciate, especially when he speaks poorly about Jack. After this, Vlad falls into Maddie's ill-graces.

In "Reign Storm," when Vlad claims to have saved Danny's life, Maddie's opinion of Vlad improves out of gratitude, but she continues to harbor a mixed opinion towards him. It has since been consistently shown that she still doesn't trust him.

In "Phantom Planet," when Vlad reveals himself as half ghost, Maddie is shocked but she thinks turning the disasteroid intangible is ingenious.

Maddie is considered a technical genius, creating most Fenton devices with her husband, which often help her son in his adventures.

She sometimes works on her own set of inventions, like the Maddie Modulator, a device to alter spectral frequency and reverse the process. Usually, she doesn't have time to work on them because she has to deal with fixing everything Jack breaks.

Maddie is an accomplished martial artist (with a ninth-degree black belt) as well as a marksman. Along with her high-tech equipment, she uses her combat skills to defeat ghosts effectively.

All future versions of Maddie are an action-packed force to be reckoned with. In the series Maddie is shown to be one of the best (if not the best) ghost hunter, and in the 10 years since Phantom Planet, she has gained 10 years of experience kicking ghost butt.

The first version of Maddie 10 years later is, to quote Maddie in Girls' Night Out "No thinking… Action! Lots of ghosts splattered everywhere!" This attitude is reflected by the BFG she wields. Her physical characteristics are more punk, as seen with her buzz cut.

Version 2
The second version of Maddie is all about the weapons. She’s pictured diving out of an airborne vehicle with an ectobomb under each arm. This version of Maddie lives in a world where the Ghost Zone is in turmoil and the ghosts are moving to the human world as a result. With the increased ghost activity on the human plane, the Fentons have gotten more and more involved. They have been fighting ghosts day and night, and they have countless weapons to help them do this.

Version 3
In the third and final version of Maddie 10 years later, her costume is punk just like the first version, but with some additions to emphasize the look. Just like all other members of Team Phantom she bears the DP logo on her outfit. Her character is in the same theme as Mad Max and strongly resembles Michonne from The Walking Dead (Hartman made the analogy while drawing her final 10 years later drawing). Her two main pieces of "equipment" are a ghost/ecto bat, likely an updated, ecto-based version of the Fenton Anti-Creep Stick. The second is a pair of ghosts she keeps on leashes and uses them to help her sense ghosts to give her an advantage and allow her not to be caught off guard by potential sneak attacks. 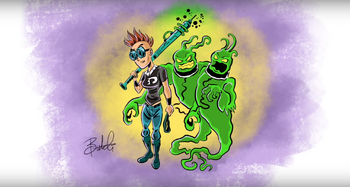