Danny Phantom Wiki
Register
Don't have an account?
Sign In
Advertisement
in: Stubs, A to Z, Staff,
and 3 more

Martin Mull is an American voice actor. In Danny Phantom, he provides the voice of Danny's arch-nemesis, Vlad Plasmius. He was credited as a guest star in Seasons 1 and 2 episodes featuring Vlad, but was credited along with the main cast starting in Season 3. 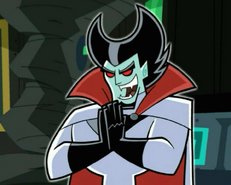