Danny Phantom Wiki
Register
Don't have an account?
Sign In
Advertisement
in: A to Z, Merchandise, Video games,
and 3 more

On Volcano Island, a couple of crabs, led by the Wise Crab, are doing a ritual to send 9 heroes there to save their island. But the Mawgu stops the ritual, scattering the heroes. Danny Phantom and SpongeBob SquarePants fall from the sky and end up with a Wise Old Crab, and The Crab explains that their enemy, The Mawgu, has escaped from his prison and created a terrible ooze which corrupts everything it touches. But the prophecies say that The Chosen Ones will save them. The Crab trains them and tells the heroes to follow him so that he can direct them to camp. The heroes stop various enemies, and then find Tucker. They then go Shipwreck Cliff and rescue Tucker from repeatedly regurgitating penguins, they find camp, then are given the mission to find the "Night Girl (Sam Manson)" and the "Whiny Cephalapod (Squidward Tentacles)." They find them, and stop a few villains along the way.

They are then sent to destroy The Great Carapace, a giant sand monster with a wooden shell. They destroy the shell and push the monster into a waterfall by using catapults. They are then rewarded with a jewel, which is the battery for the communicator. They talk to Jimmy, and Jimmy explains that Mawgu is using a Rip in Time and Space to steal energy from all the worlds and keep it all for himself and if he succeeds their worlds will be destroyed. Then Jimmy sends Tucker plans for the Neutronic Rip- Zipper, a device that recovers all the energy Mawgu stole and closes the Rip. The parts they need for the device are scattered across the Island. After the Nicktoons gain all three Rip-Zipper items, they go in the Volcano, and find The Mawgu, whom transports them between Time and Space, then Danny blasts the Rip- Zipper on Mawgu, sealing the Rip with him inside.

The heroes are praised for the save of the island and Jimmy is able to activate a portal to send them home. It shows at the end, that the heroes heads' are carved into a mountain. 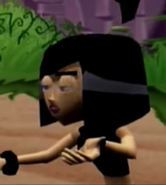