Danny Phantom Wiki
Register
Don't have an account?
Sign In
Advertisement
in: A to Z, Characters, Ghosts,
and 6 more

Maria Canals Barrera
Sayonara Pussycat is a popular, cute, and seemingly harmless ghost anime cat seen in Danny Phantom. She is a minor character who appears in Season 1 episode "What You Want" and Season 2 episode "Kindred Spirits."

Sayonara Pussycat is a parody of the Japanese character Hello Kitty; the word "sayonara" means "good-bye" in Japanese. This is referenced when Danny says "bye-bye kitty" as he separates her from Paulina and sucks it into the Fenton Thermos.

Sayonara Pussycat appears in Seasons 1 and 2.

In "What You Want," there is a movie coming out starring Sayonara Pussycat. Paulina is jealous of Sayonara Pussycat's cuteness and popularity and wishes she could be cute and popular. Then Desiree comes out of nowhere and grants her wish: Paulina is zapped into a cute anime version of herself. Danny captures her and brings her to a back room, where he forces the ghost cat out of her. As the ghost gushes about everything in the world being sweet and wonderful, Danny gets out the Fenton Thermos and sucks her in. Sayonara goes in without a fight and with a defeated "Meow!" Sometime later, Danny banishes Sayonara Pussycat to the Ghost Zone.

Since Sayonara is such a minor character, not much is known about her personality. She seems to just be a harmless cute anime kitty who wants to become the super fairy queen of all teenagerdom. 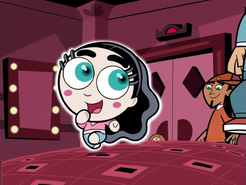 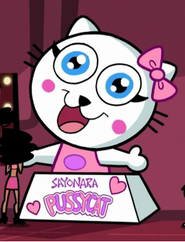 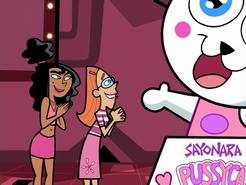 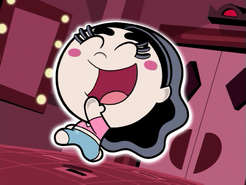