Danny Phantom Wiki
Register
Don't have an account?
Sign In
Advertisement
in: Featured Article, A to Z, Characters,
and 7 more
English

Rickey D'Shon Collins
Tucker Foley is Danny Fenton's best friend and a huge techno-obsessed person, carrying a PDA with him all the time. He is one of the very few people who knows Danny's secret and often helps battle ghosts and send them back into the Ghost Zone. He uses his expertise in the field of technology to help Danny fight ghosts.

Tucker has been close to Danny "since forever."[1] He usually helps Danny via his PDA, which he uses to hack into various technological systems such as Skulker's armor[5] or Technus' techno-suit.[6]

Tucker once expressed jealousy over Danny's ghost powers, wishing for powers of his own and gaining them unknowingly through Desiree, the wish-granting genie ghost in "What You Want." Tucker's powers quickly consumed him, turning him evil, until Danny put a stop to it, eventually restoring him back to normal through the use of the Fenton Ghost Catcher.[1]

In "King Tuck," Tucker unsuccessfully tries to run for school president against Dash Baxter. Later, during a field trip to a museum, Tucker notices that he resembles the likeness of the Egyptian pharaoh on display. Hotep RA, a mummy ghost and past servant of the ancient king, notices this as well and hands Tucker the king's ancient scepter, which possesses Tucker and allows him to create an ancient Egyptian-themed world with himself as ruler and the teachers and students as his servants. Danny is forced to once again rein in his over-eager best friend.[7]

In the series finale, Tucker became the youngest mayor of Amity Park.[8]

Tucker has brown skin, turquoise eyes, black hair, and wears black glasses. He wears a long-sleeve yellow shirt, green cargo pants with a black belt, and brown boots along with a red beret. He is almost always seen carrying a backpack.

Tucker is a very optimistic, light-hearted joker. He enjoys talking, but often does not know when to keep his mouth shut, causing him to blurt out more than he should or cause trouble for his friends (such as by accidentally revealing the password put on the Ghost Portal to the Guys in White).[9] His cloying, geeky, and appealing nature is not popular with the other students of Casper High and he generally has a bad reputation amongst them.

Tucker is a valuable friend to Danny throughout the series, mostly contributing with his technological expertise. He has used technology to defeat various barriers ranging from hacking into Technus' technological creations, to setting off security alarms.[10] Despite his reluctance, he is loyal to Danny, from spying on Sam for Danny when she briefly dated Elliot[11] to sharing just about anything with him. Tucker has also shown to be rather observant as he quickly notices Sam's crush on Danny and is often the middleman between Danny and Sam.

Tucker is mildly flirtatious and particularly interested in girls, though every attempt of his to get noticed by one has failed. Tucker's most serious crush was on Valerie Gray, which ended shortly afterwards, turned off by her status as a ghost hunter and enemy of Danny.[12] Despite being rejected constantly, Tucker still considers himself to be highly desirable due to his confident nature. He often dreams as big as he feels on the outside.[13]

Tucker's first love, however, is technology, for he cannot live without it - to the point that his greatest fear is life without technology and his trusty PDA (of which he has more than one).[14] His love is so great that he will go to great lengths to get the latest technology.[15] Tucker's PDAs are the most useful items of technology used to aid Danny's ghost-hunting and fighting exploits, next to the inventions of Jack and Maddie Fenton.

One of his greatest weaknesses is a tendency to abuse his relationships with his friends once he is in a position of power. Tucker has an inferiority complex where his friends are concerned, and whenever Tucker becomes empowered through a ghostly wish or otherwise, he tends to turn on his friends. This suggests a power-hungry and volatile side to the otherwise-placid Tucker. At one point, Tucker was even perfectly willing to kill Danny at the behest of his wish-granting ghost benefactor. He is seen as irresponsible with power, using it for personal pleasure rather than the more righteous reasons Danny wields his with.[7](similar to Vlad Plasmius)

Tucker values Danny as his best friend, seemingly sharing everything with him. He is loyal enough to do various things for him (spying, hacking, etc.), but has expressed jealousy over his ghost powers. Despite it all, Tucker always has Danny's back, whatever the case may be. 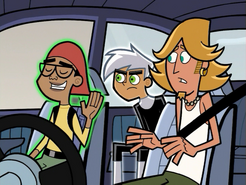 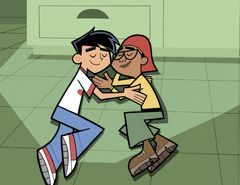 Danny and Tucker asleep together 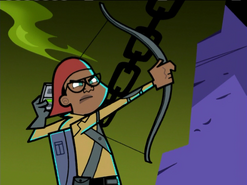 Sam and Tucker are good friends, but are opposites to each other in terms of temperament; Sam is a strict vegetarian while Tucker loves meat. She is also more down-to-earth and determined while he's more impractical and relaxed. This makes Sam and Tucker total opposites, but deep down they are still good friends. Tucker is the first to note Sam's feelings for Danny, but he does not make much out of it.

Despite their relationship not being as explored as others, it is clear Jazz thinks of Tucker as a friend and vice versa. Though Tucker displayed visible annoyance when Jazz slipped up or made relatively questionable suggestions on the team, he still was more welcoming than Sam was. They opened up to each other at the end of "Frightmare" about the dreams they had prior to the episode's climax.

Tucker was at the point of a possible relationship with Valerie, but stopped seeing her after finding out about her dislike of Danny Phantom.

However, despite disliking Valerie after seeing what see truly is, In "Shades of Gray", he helped save her and save her dad's job by purposely capturing himself in a net, which letting them assume he was the one to have caused the damage, and said hello to her in "Flirting with Disaster".

He starts out serving Tucker due to his resemblance to the pharaoh he once served, but secretly plans to use him to usurp the throne, a plan thwarted by both Danny and Tucker.[7]

It has been shown on multiple occasions that Tucker has a crush on Paulina's "satellite," Star, even briefly dating her in "Lucky in Love."

Tucker has invented a few gadgets over the series.

Stated in his personality.

During his time as mayor Tucker turned Amity Park into a high-tech city. Fingerprint and retina scanners have been installed all over the city to do even mundane tasks like paying parking meters. His intention is to make life easier for everyone, though Technus might take advantage of the omnipresent technology it would still be a change for the better in the end. Despite being so young Tucker is an exemplary mayor and has been reelected for at least 4-5 years because he's popular, funny, and great at running the city. In fact, he is so successful at running the city that he has become a world-renowned leader and an example for leaders all over on how to run a city. He even goes on tours to other cities to show other mayors/leaders on how to run a city.

He does still want to go to college. He might attend Fenton University, possibly as a teacher. As seen in the series he is very smart and so being a professor at that age, while abnormal, would not be a surprise. Although this would probably not happen as he is extremely busy being the mayor and wouldn't have time to teach.

The first sketch of Tucker 10 years later is very different from his original character design. The only similarities that remain are the style of his pants (cargo pants) and boots. Tucker 10 years later has an updated hairstyle, glasses, hat, jacket, and technology. His beret and close-cut hair have been replaced by a Rastafarian style hat and some dreads. His glasses have a thicker, round frame and he has a small soul patch. His long sleeve shirt is now covered by a long sleeved jacket, on which he wears a presidential pin that is a reference to his time as mayor of Amity Park. In addition, his beloved PDA has been switched out for a smart phone to match the changing technology. Hartman said that he sees Tucker as a modern day Steve Jobs, and that he possibly invents a technology company (Foley Corp.)

Version 2
The final, colored version of Tucker 10 years later is more similar to the first sketch, but with some accents from the original design to complete his look.

The overall color scheme is different, except for his hat which is colored with his original character design colors. His hair is the same as his original design, although it is possible that he has some dreads underneath his hat). His top is a combination of long sleeves (seen in the original design) and a short sleeved hoodie (seen in the first sketch). His pants and shoes have been updated as he is now wearing blue jeans and white sneakers as opposed to cargo pants and brown boots. He still has his backpack, but it is now brown instead of blue. Although this version does not include the presidential pin, Hartman said that he was likely mayor for a few more years after Phantom Planet (see "The College Years"). He is likely still carrying around various technological devices in his backpack and jacket (such as the smartphone seen in the first sketch), he is pictured wearing goggles and operating a drone bearing the DP logo. He wants to fly around like Danny does so he uses his drone which acts as his eye in the sky and essentially allows him to "fly". His glasses have been traded out for goggles, which are high tech eyewear that help him control the drone.