Dee Bradley Baker
Wulf is a ghost resembling a werewolf. He has retractable claws that have the ability to tear open portals between Earth and the Ghost Zone.

He was a former prisoner of Walker's prison until freed by Danny.

Wulf's first appearance was in "Public Enemies" as a prisoner of Walker. Walker sends him to find Danny Phantom and his friends in exchange for his freedom.

However, after meeting Danny, the two quickly become friends. Danny, Sam, and Tucker do their best to help Wulf, eventually freeing him from the shock collar Walker placed on him. In return, he helps Danny stop Walker, risking his own freedom.

In "Boxed Up Fury", Wulf makes a cameo appearance on a wanted poster with a $1 million bounty on his head. This draws the envy of the Box Ghost, as his bounty is only $2.50.

Wulf later appears in "Claw of the Wild". He manages to escape Walker's jail again by creating a ghost portal, but accidentally leaves it open, allowing various ghost creatures to escape into the summer camp where Danny and his friends are staying. Walker realizes this, and abducts the campers - including Tucker - to lure Wulf and Danny back. Danny, Sam, and Wulf manage to take out Walker's goons and free the campers. Danny then releases Wulf into the woods.

Wulf's final appearance is in the series finale, "Phantom Planet". He is one of Danny's many Ghost Zone allies who help to power the machine to save the Earth from the Disasteroid by turning it intangible.

Wulf resembles a large, muscular werewolf or anthropomorphic wolf, with large saber teeth. Wulf wears a worn green sweatshirt with a hood that he usually keeps down, and tattered green pants. 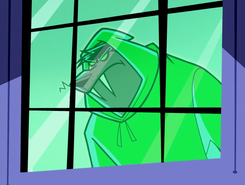 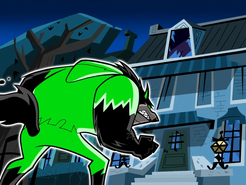 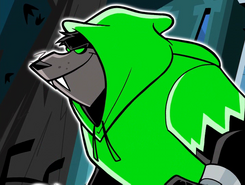 Wulf speaks some form of Esperanto, which at first only Tucker understands[1], though Sam and Danny later learn it.[2]

Despite his imprisonment by Walker, he’s like any other wolf, he is very sociable and enjoys the company of friends. As Sam describes him, he is ferocious but not too bright. He is loyal to his friends and will protect them from any danger. 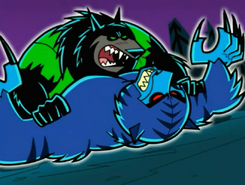 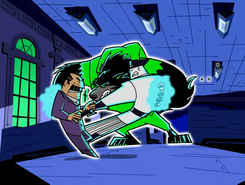 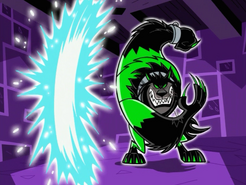 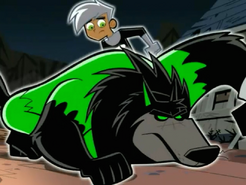 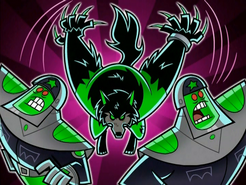 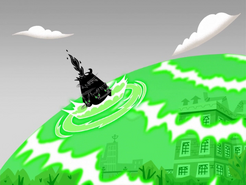 The form of Esperanto that Wulf speaks is not in any way grammatically correct, and is in fact in almost all of his lines a direct word for word substitution from English equivalent words. For instance, The quote of him saying "Li estas al meti via amiko ena maliberejo!" is trying to say "He is going to put your friend in prison!" However, this is impossible to parse per Esperanto grammar, as it treating the prepositing 'al' as the infinitive particle, and neglects to place 'via amiko' and 'maliberejo' in the accusative case. A possible correct form is "Li tuj enigos vian amikon en la malliberejon!"

Retrieved from "https://dannyphantom.fandom.com/wiki/Wulf?oldid=103749"
Community content is available under CC-BY-SA unless otherwise noted.