Danny Phantom Wiki
Register
Don't have an account?
Sign In
Advertisement
in: A to Z, Objects, Artifacts of the Ghost Zone, Vehicles

3
Youngblood's Pirate Ship is the ship Youngblood is the captain of in "Pirate Radio."

In "Pirate Radio," Youngblood captains this ship and, with the aid of Ember, lures adults over 30 years old (and Jazz) onto the ship, disguised as a cruise ship from M.Bersback Cruise Lines. The adults were lured on board to get them out of the way, allowing for Ember to take over the world, and to act as a power source for the ship. The adults power the ship by running on treadmills Youngblood and his crew stole from Casper High School.

The entire ship is protected by a ghost shield that Youngblood stole from the Fentons, preventing Danny Phantom from flying in and stopping Youngblood and Ember. Tucker is able to disable the shield and after the battle, he sets it in reverse, trapping Youngblood and his assistant inside.

In the "Fenton Menace," during their family underwater excursion, Danny spots the ship underwater. He tells Jack not to go in there, but Jack mishears and goes inside. Youngblood and Youngblood's Assistant are still trapped inside but only Danny can see them. In his panic Danny starts firing the sub's weapons, destroying the ship and subsequently the ghost shield, allowing Youngblood and his assistant to escape.

Youngblood's Pirate Ship is a dark gray-and-green brig sloop. The crew's Jolly Roger is a cartoon-like depiction of a traditional skull and green cross-bones. In addition to being on their flag, the jolly roger has also been shown on the sails of the ship. The huge masts give the ship extreme maneuverability. The figurehead is a skeleton mermaid with a scythe. The ship holds six cannons: three traditional cannons on each side of the ship. 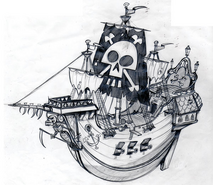